Last spring, Rice University invited full-time undergraduate and graduate students to take the Association of American Universities (AAU) Campus Climate Survey on Sexual Assault and Misconduct. Rice was one of 33 institutions that participated in this effort.  In addition to gathering important, up-to-date information about the health and welfare of our students, the university had four main goals in asking students to complete this survey:

The AAU employed Westat, an independent social science research firm, to create and administer the survey.  Westat collaborated with a team of experts and scholars from the AAU and universities.  Additionally, a draft instrument, based on the 2015 AAU Campus Climate Survey, was submitted to the 33 participating universities, which were encouraged to provide feedback and input. At Rice, the Office of the Provost met with SA, GSA, and STRIVE representatives to review the draft survey and compile a set of questions and suggestions for submission to the AAU/Westat.

At the conclusion of the survey period, Westat created reports and data tables for each of the 33 participating institutions, as well as an aggregated report that combined data for all of the institutions. The tables containing Rice’s data, the full campus climate report for Rice, and the AAU’s aggregate report are posted here:

What follows below is a summary of some of the key results drawn from the report and data tables produced by Westat for Rice.  As such, it does not represent all or the only conclusions that can be gleaned from a thorough review of the data.  For those interested in more detailed findings, we encourage you to review the tables.

Key Findings from the 2019 AAU Survey

Prevalence of Incidents of Nonconsensual Sexual Touching or Penetration

Rice’s data tables include three sets of tables on reports of incidents of nonconsensual sexual touching or penetration. Tables 3.1-3.6 concern only incidents involving physical force or inability to consent or stop what was happening.  Tables 4.1-4.5 concern only incidents involving coercion or without active, ongoing voluntary agreement. The data in these sets of tables build to and are combined in Tables 4.6-4.9.  Accordingly, we focus here on 4.6-4.9 because they employ the most expansive definition of nonconsensual sexual contact.  Specifically, these tables show prevalence rates for the percent of students who experienced completed or attempted nonconsensual penetration or sexual touching through the four different tactics covered in the survey.

Table 4.6 shows, for all Rice students, four rows of data for nonconsensual penetration and nonconsensual touching. The rates were calculated for the period since respondents enrolled at Rice and are presented for all undergraduate and graduate students, and by gender - for women, for men, and for those who identify as transgender, nonbinary, genderqueer, questioning or did not list a gender identity, referred to as TGQN in the tables. Please note: Since only 59 responding students identified as TGQN, which is 1.3% of all respondents, not all tables show findings for this group since the sample sizes were too small for Westat to generate a reliable estimate.  Also note that the information in Table 4.6 is cumulative, starting from the first row and then expanding the definition of nonconsensual penetration and nonconsensual sexual touching as you move down the table:

The next three tables show similar data, but restricted to different populations at Rice: undergraduate students (Table 4.7), graduate or professional students (Table 4.8) and undergraduate students in their fourth or higher year of study at Rice (Table 4.9).  Below we list some key findings from these tables, and present, as reference in parentheses, how they compare to the national AAU data (that tallies across the 33 schools that participated in the study): 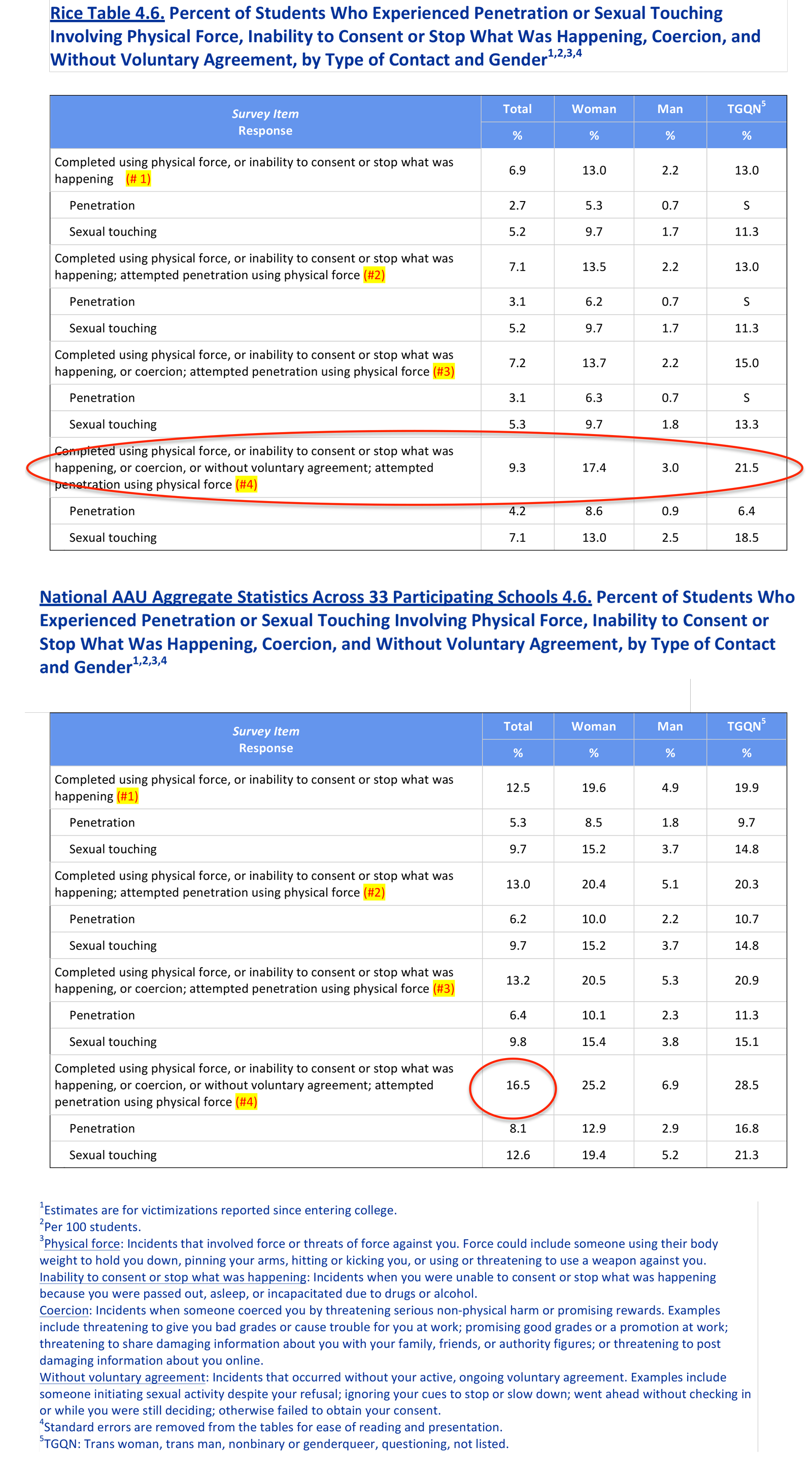 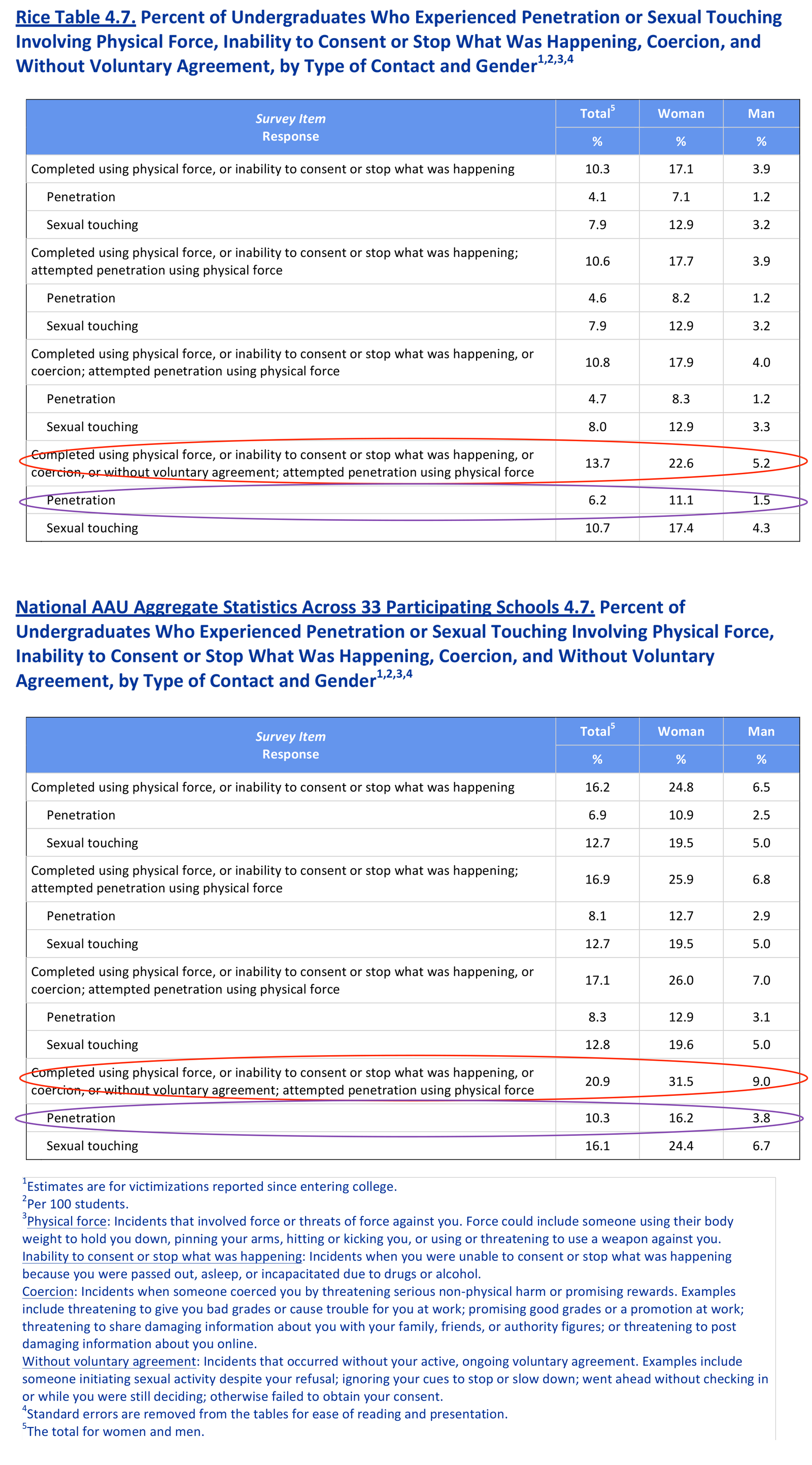 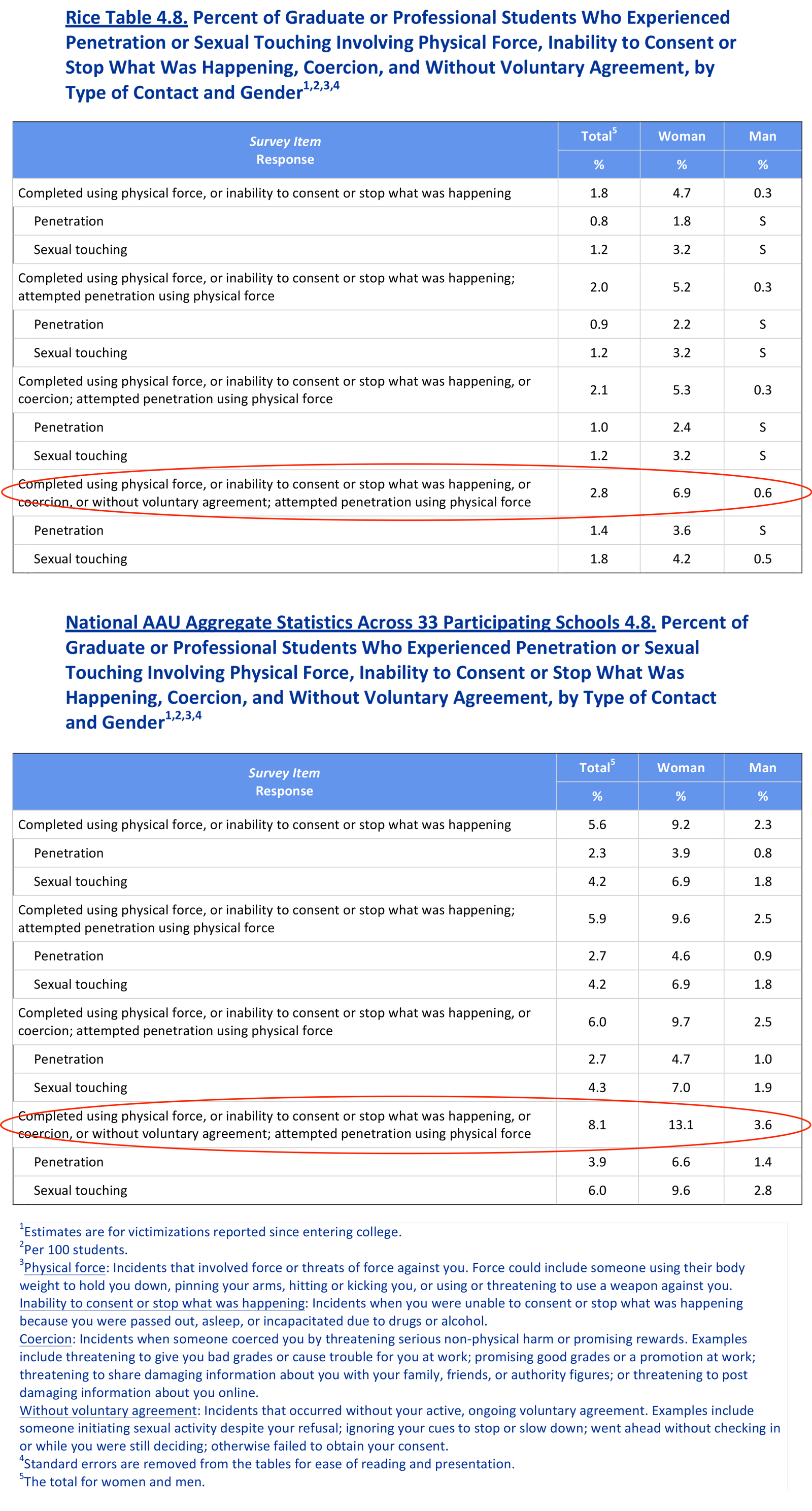 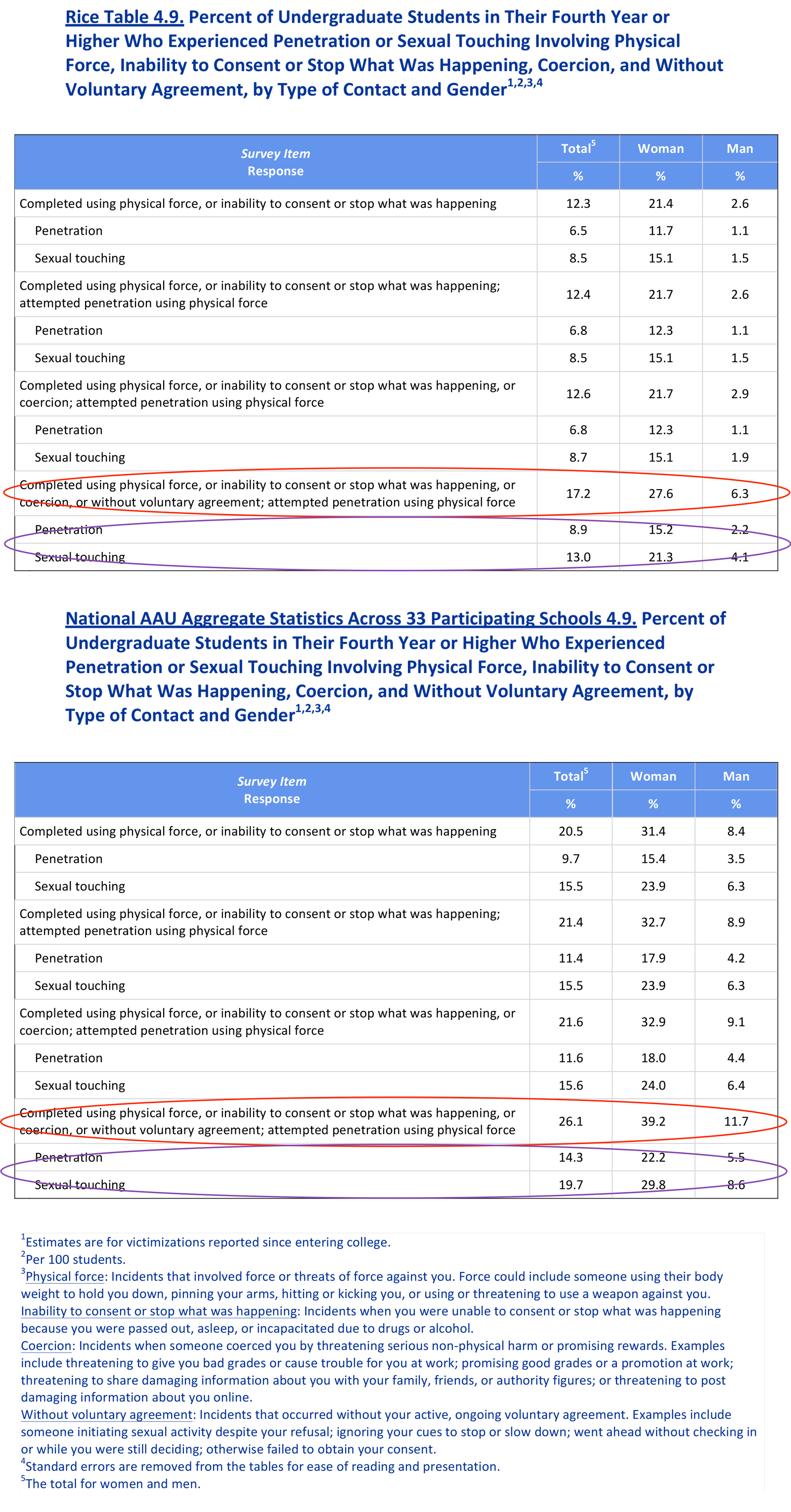 Confidence in the Administration (Table 1.1) 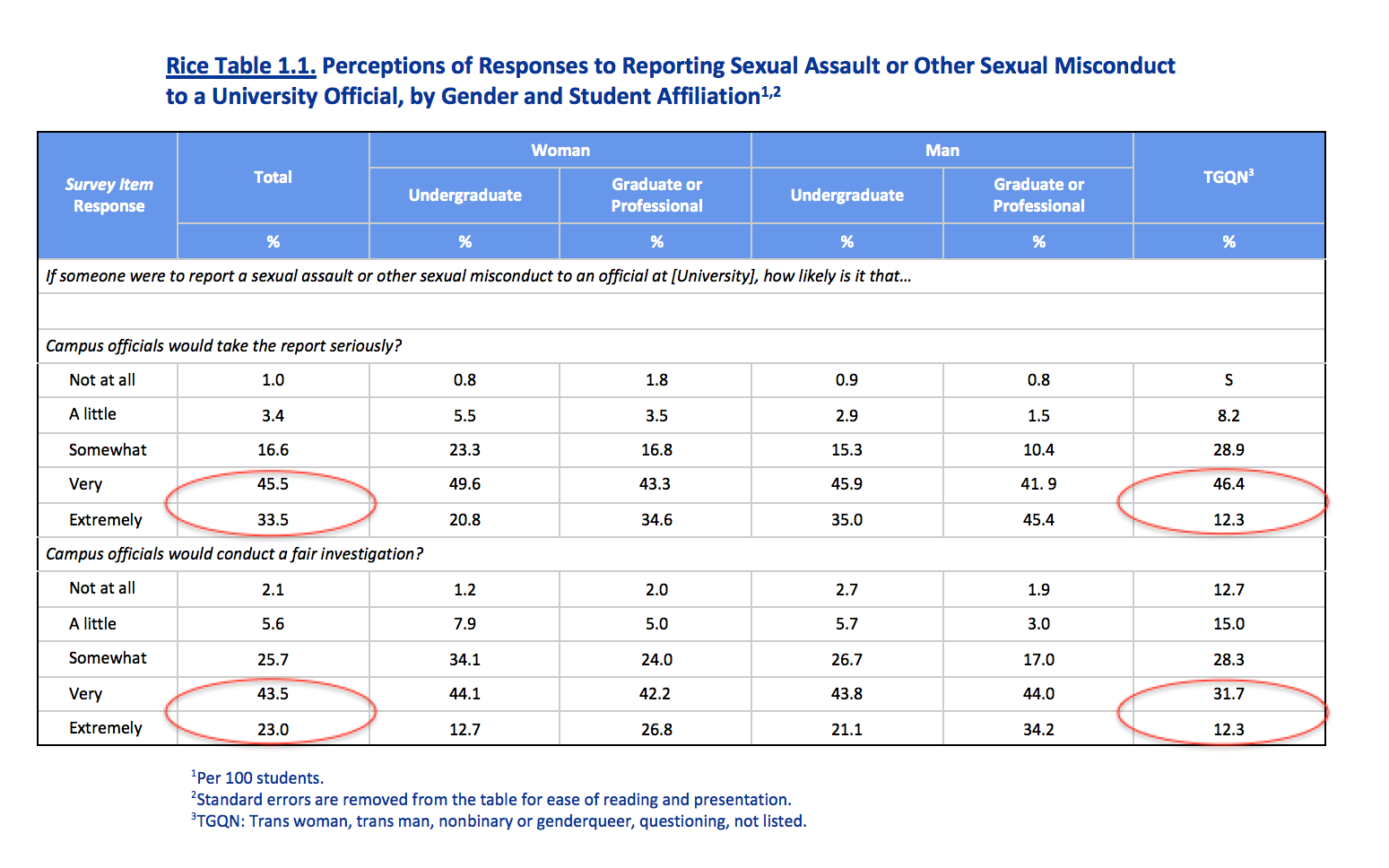 Among students who witnessed this type of behavior, about one-quarter either directly intervened or interrupted the situation (22.7%), or confronted or expressed concern to the person engaging in the behavior (26.8%). 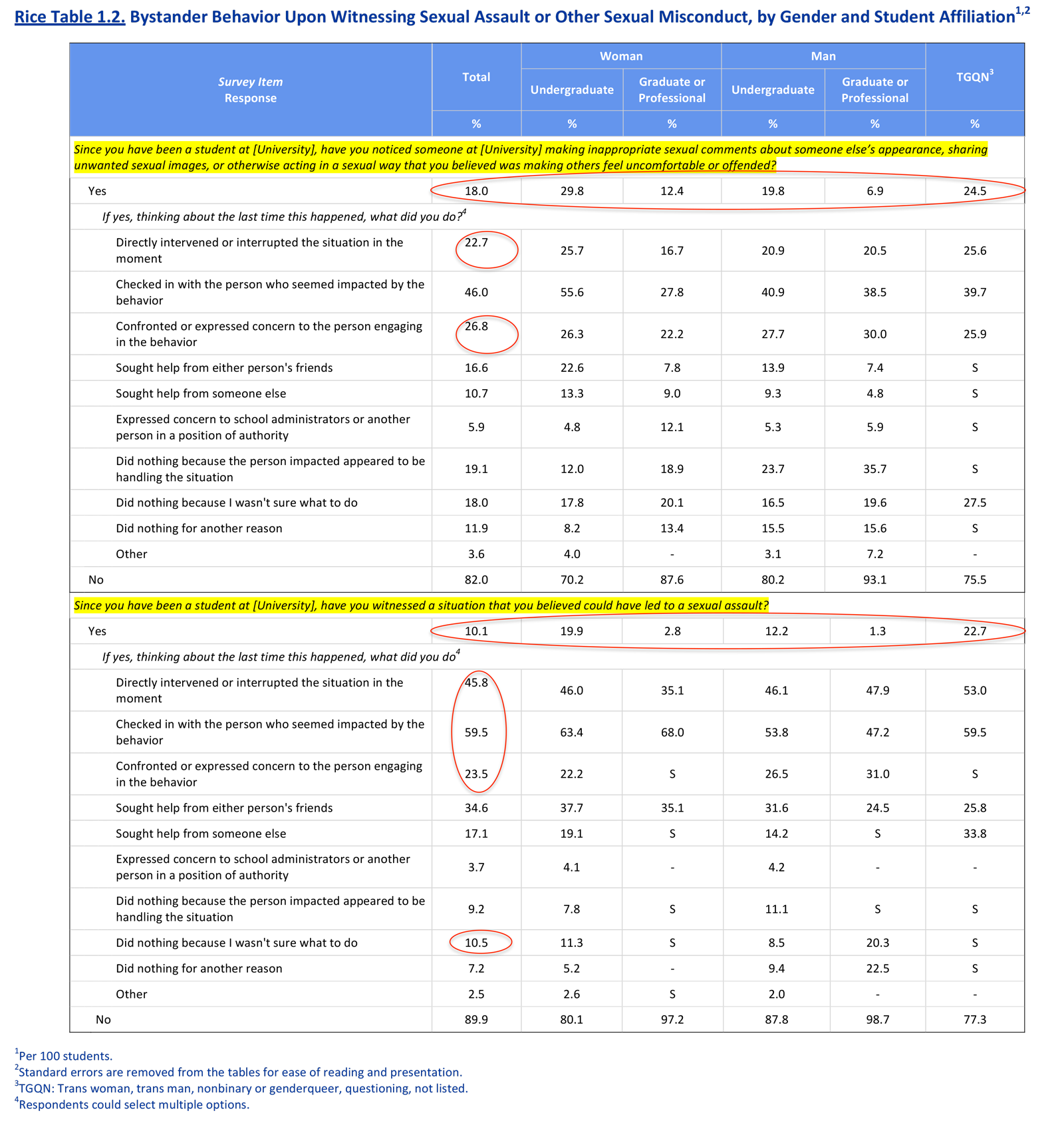 Campus Climate and the Culture of Care (Table 1.4) 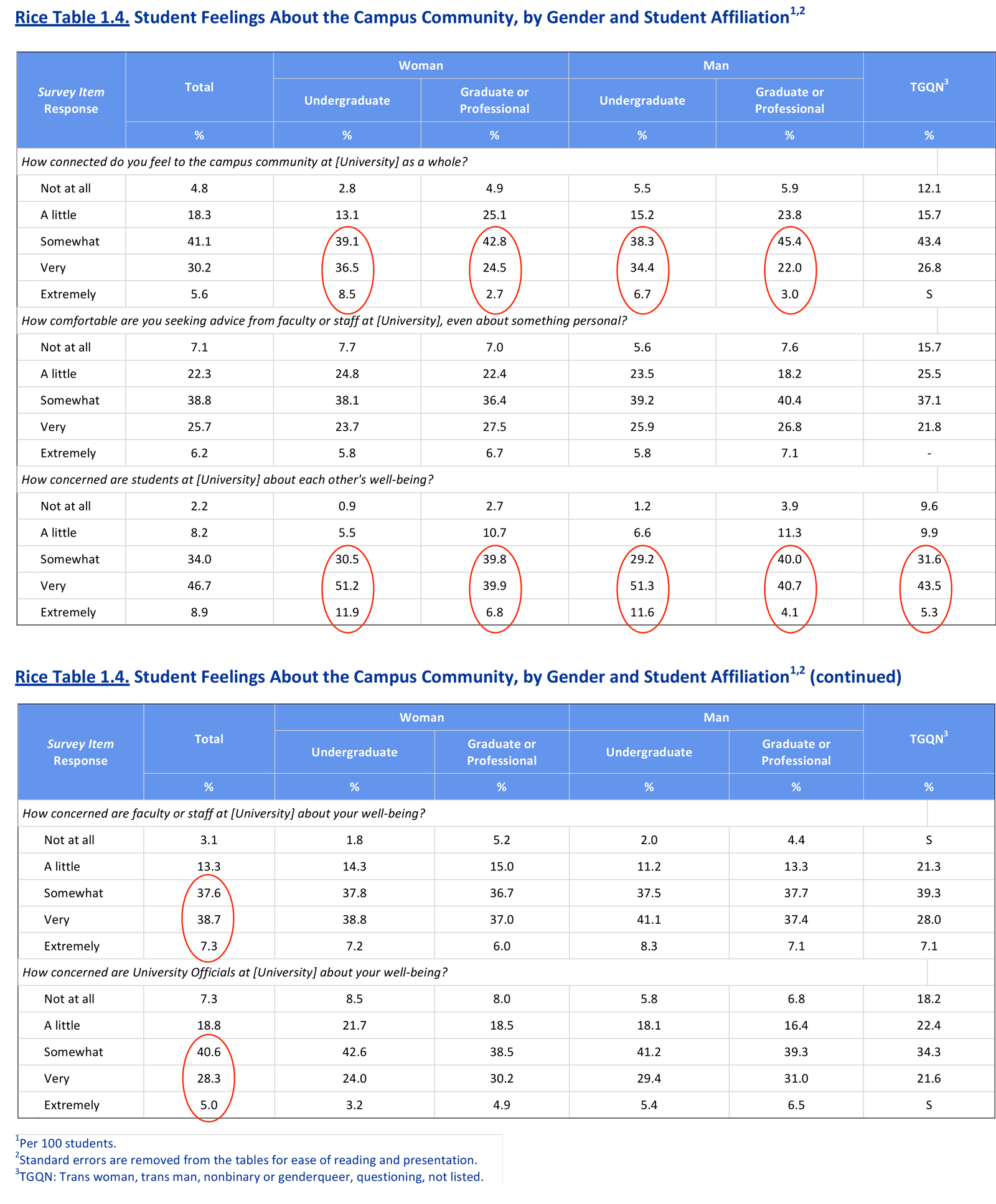 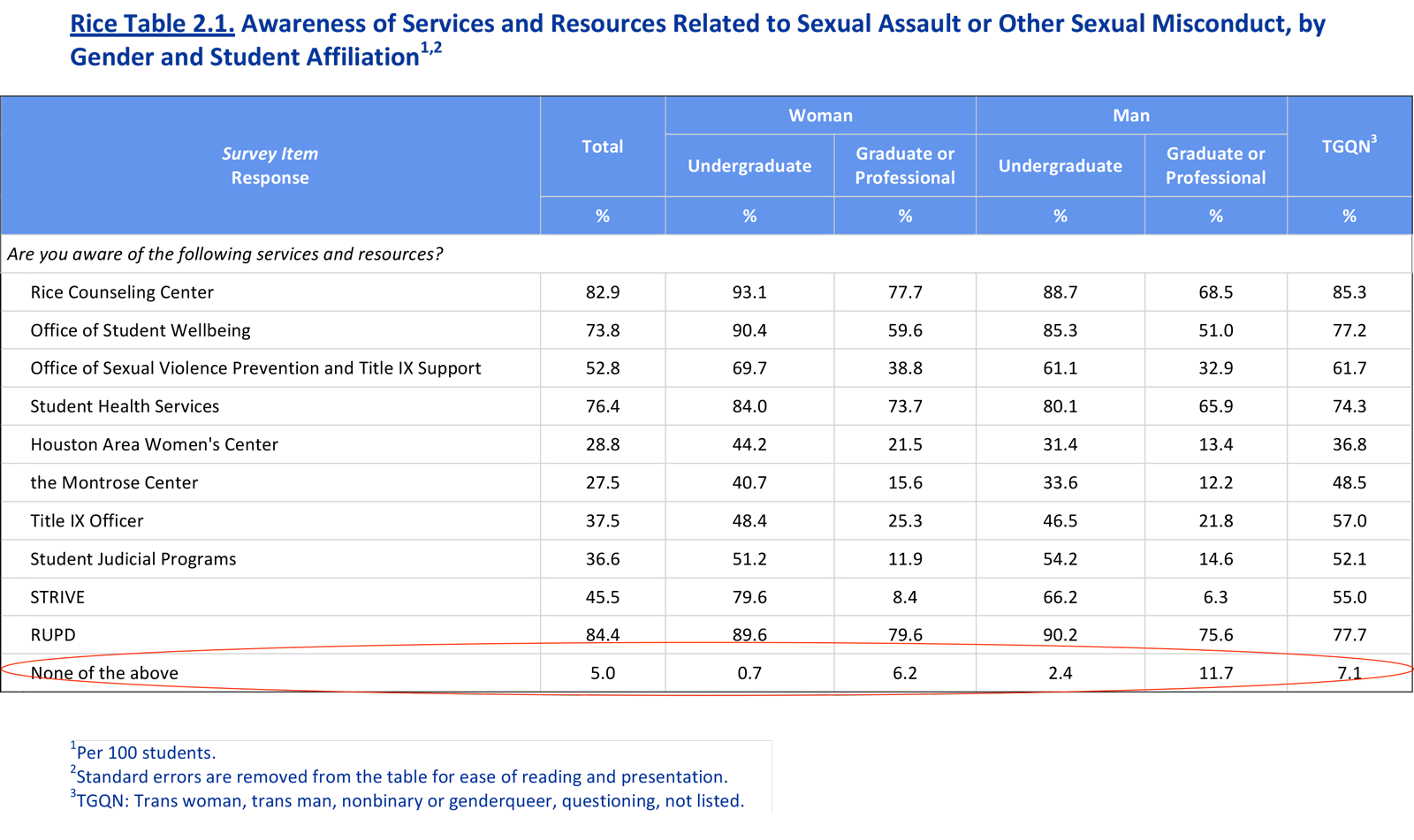 Knowledge of Policies and Resources (Table 2.2) 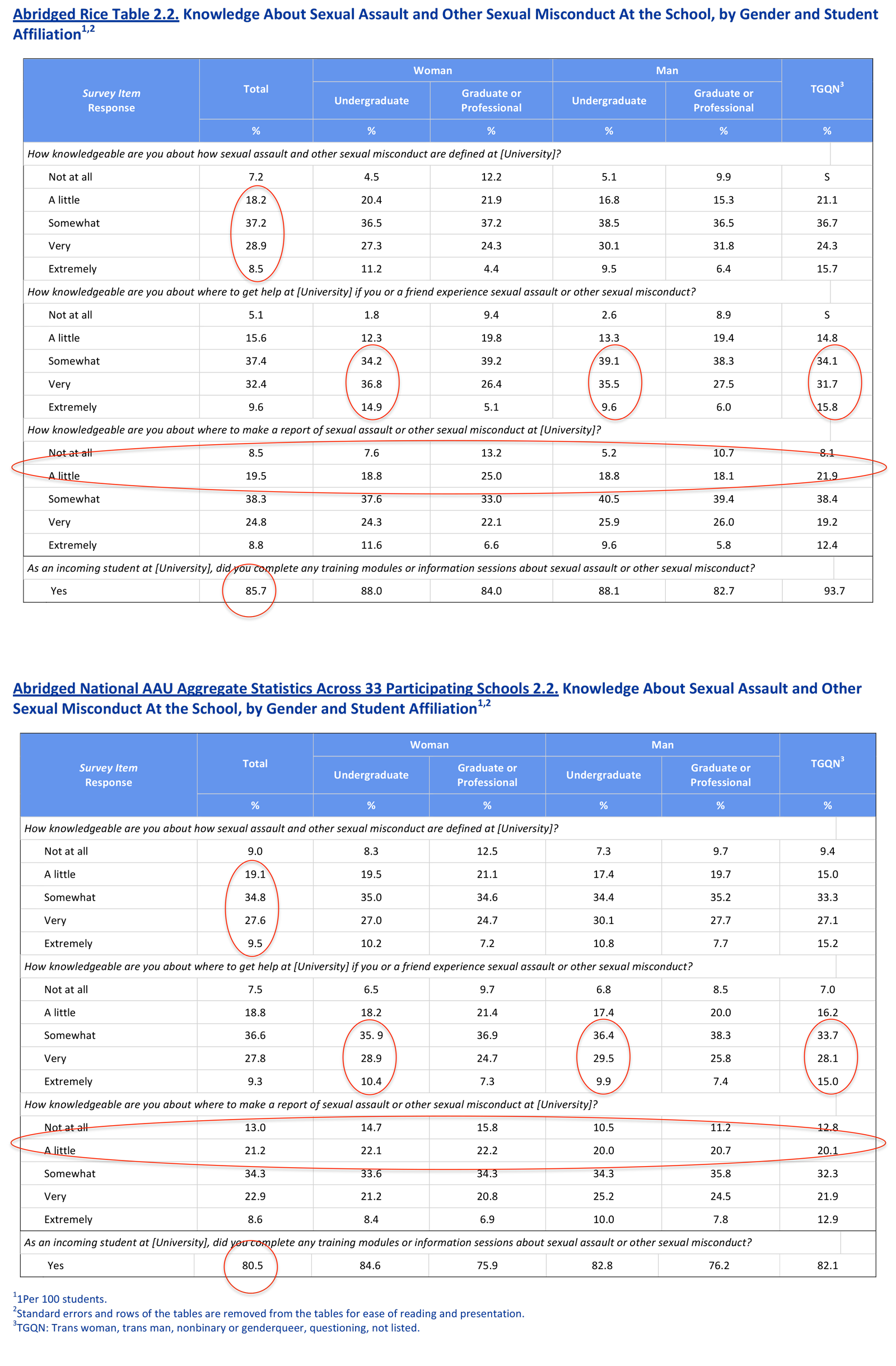 Rice did not participate in the AAU survey in 2015 but, instead, administered its own Survey on Unwanted Sexual Experiences (SUSE). Unlike the current AAU survey, the SUSE asked only about incidents of unwanted sexual experiences and did not ask a broader set of questions about campus climate, student perceptions or knowledge of policies and resources. In addition, the methodology for how the surveys collected information on unwanted sexual experiences differed in selected ways. Because of this, our ability to compare across the 2019 AAU and the 2015 SUSE is limited. 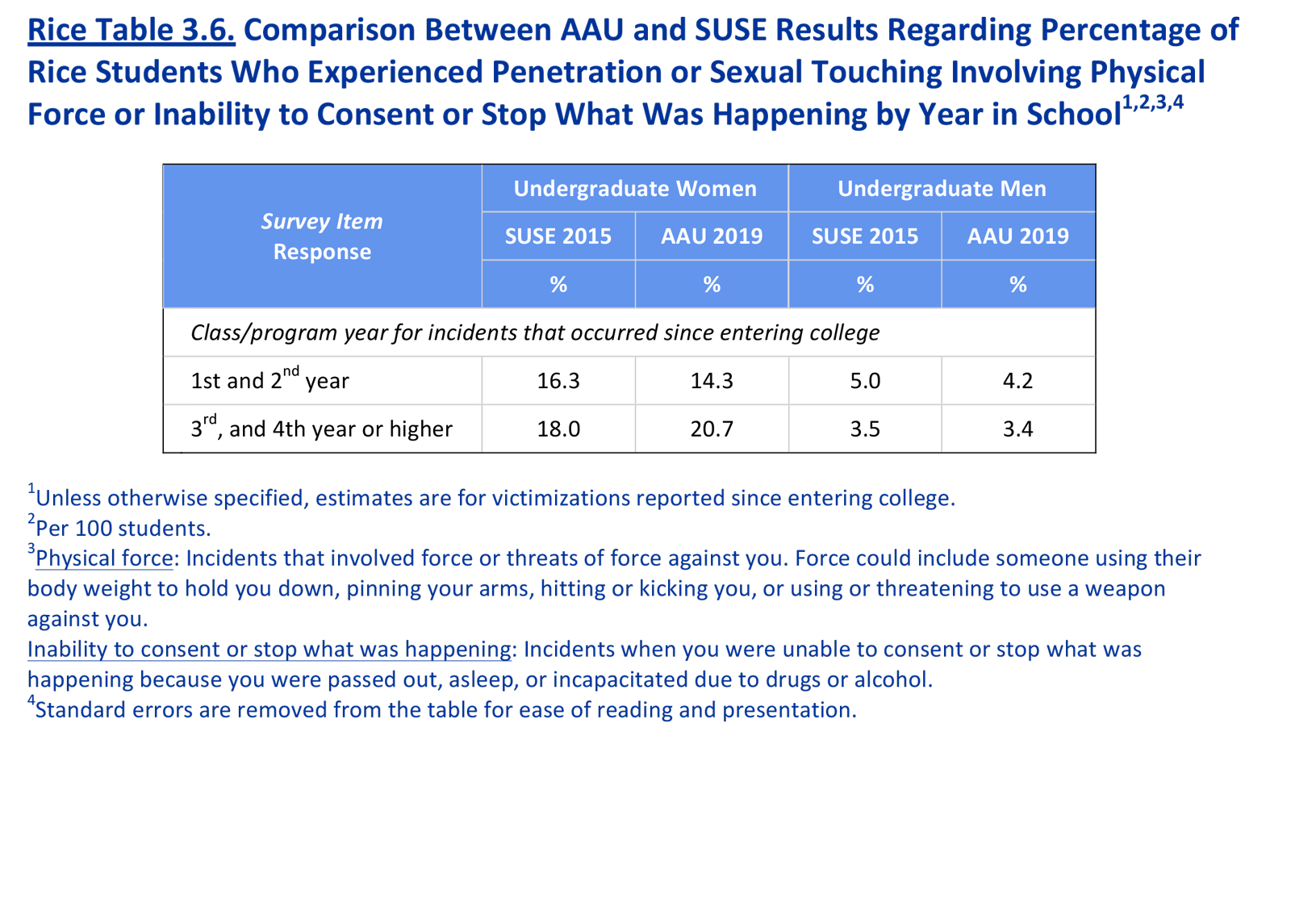 What has changed at Rice since administration of the Survey on Unwanted Sexual Experiences in 2015?

[1] This question asked respondents about a unique set of resources and offices at their respective institutions; accordingly, there is no aggregate data for comparison.